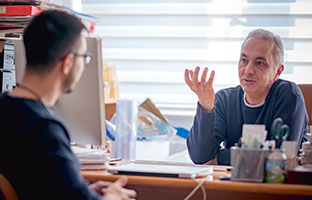 Sasha, a PhD student in geography, is taking a course that her supervisor, Pat, is the teacher. Pat will be grading Sasha’s essay soon, as per the university’s grading policy guidelines. Sasha is also a teaching assistant (TA) in Pat’s undergraduate course, where a collective bargaining agreement governs their relationship. Over the summer, Sasha will join Pat and some undergraduate students at a field camp in the Arctic. Sasha will be paid from Pat’s scholarship to supervise a few undergraduate students and conduct some of the research. While in the field, Pat supervises Sasha under a Collective Bargaining Agreement for Research Assistants (RAs) and also mentors Sasha, the aspiring researcher. The work that Sasha does in the field will form the core of their thesis and will give them the right to co-write a paper with Pat. If Pat is lucky, Sasha will come up with ideas that Pat might have missed. Thus, the success of this document may depend on how well they can function as colleagues.

Within months, Sasha had two different employment relationships with Pat as a teaching assistant and research officer, plus two relationships as a student in a course and as a mentee, and a college relationship in as co-investigator on a research project. They will also form a friendship through the shared experience of undergraduate camp kitchen horror. To add an additional complication, Sasha will take over as president of the society of graduate students in geography upon their return from the Arctic; Sasha and Pat will have equal voices and votes at monthly geography department meetings.

When they return to campus and start a new fall term, Sasha thinks everything is fine, but Pat writes a rather harsh review of Sasha’s first full exam. Pat is happy that their co-authored paper was accepted, but the department chair shares a memo from the graduate student society complaining about the lack of Indigenous perspectives in graduate courses — including the one Pat teaches. Things aren’t going so well for Sasha and Pat, but they both struggle to figure out why. Yet it’s no surprise that student:supervisor relationships can go awry when student and faculty member have multiple roles, some of which operate simultaneously.

When I was Dean of Graduate Studies, I found that many problems between students and supervisors were caused by two factors. First, students and supervisors struggled to disentangle the multiple relationships in which they were involved. Second, miscommunication about the expectations of both parties led to frustration, misunderstanding, and eventual hostility.

By the time these issues reach higher education, they have often become intractable because positions and opinions have hardened. When supervisory relationships go sour, students tend to blame the university for not regulating the behavior of “bad” faculty members. Supervisors tend to chastise students for not submissively accepting their subordinate status.

Students and supervisors usually have different views on their roles. Here, I will focus on research-intensive graduate programs, rather than professional graduate programs, because older programs are where student:supervisor problems most often arise.

Faculty members often describe the graduate student/supervisor relationship as learning or mentoring. Apprenticeship tends to evoke some difficulty for the student, while mentoring involves a softer guiding hand. Regardless of terminology, the faculty member sees themselves as the expert who will turn the smart but inexperienced student into something new. From the faculty perspective, the student learns from the supervisor through formal teaching and less formal research supervision. By observing the faculty member teach and participating in teaching activities as a teaching assistant, the student develops skills that will put him on the path to his own academic position. And by conducting research under the watchful eye of the supervisor, the student will become an independent researcher. It is not uncommon for professors to replicate their graduate “learning” experience for their own students.

The student has another point of view. Throughout their undergraduate careers (and sometimes in a master’s program), they excelled and were rewarded for their skills as students. Upon entering a research-intensive graduate program, they find that new skills are required and the criteria for success are more difficult to define. While their supervisor believes that the apprenticeship transforms the student into an independent scholar, an alternative view offered by the TA/RA unions is that of the ‘oppressed worker’. From this perspective, graduate students are seen as helpless workers, beholden to supervisors who can make or break student/worker aspirations. This power imbalance leads to the exploitation of the student through long hours of work, theft of intellectual property, poor pay, opportunities for detention, and unrealistic performance expectations.

Self-interest fuels both the learner and worker metaphors of the student:supervisor relationship. It is easier for a faculty member to treat the entire graduate student experience as multi-faceted learning because they do not need to compartmentalize their behavior into categories such as teacher, employer, colleague, etc. It’s easier for a TA or RA union to label their members as oppressed because they don’t have to recognize that workers have other relationships with their supervisors that aren’t covered by the collective agreement. Nor do they recognize that the ambition of many of their members is to become one of the “oppressors”.

The reality for graduate students and their supervisors is that life is messy and relationships are complicated. The best way to prevent problems in the relationship is to recognize its complexity and use simple communication methods to minimize the likelihood of problems spiraling out of control. But, due to the unalterable power imbalance between student and supervisor, each requires different tactics to make the relationship work. I will cover them in the next two articles.

Jonathan Driver is a part-time professor of archeology at Simon Fraser University. Previously, he served as Dean of Graduate Studies as well as Provost at SFU.