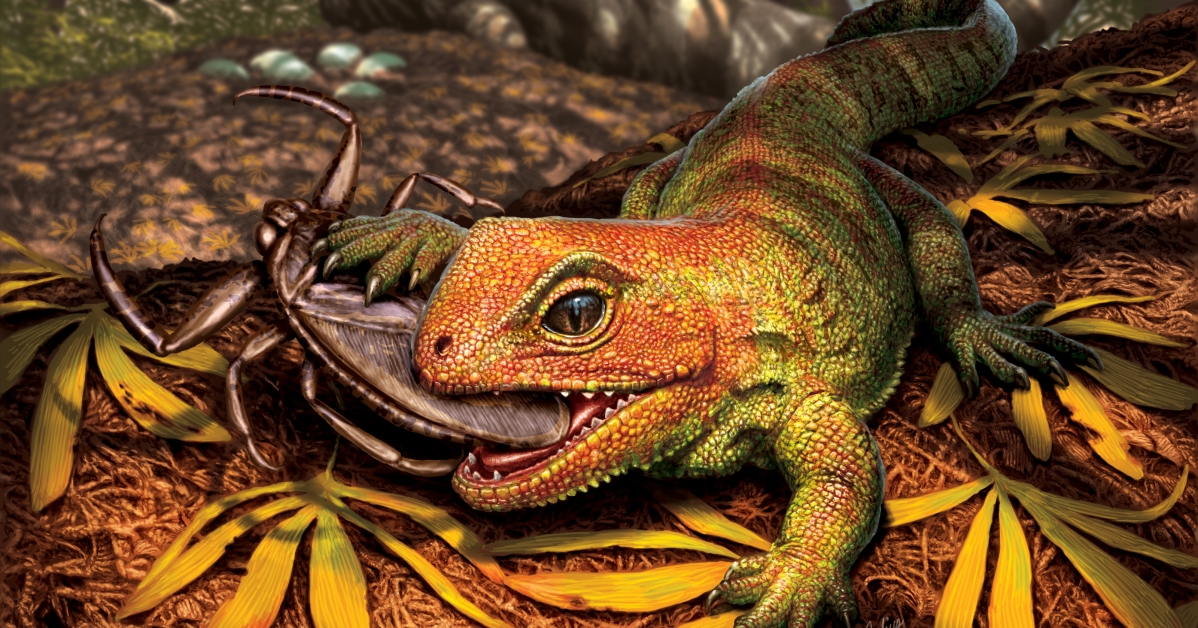 Smithsonian researchers have discovered a new, extinct species of lizard-like reptile that belongs to the same ancient lineage as the living New Zealand tuatara. A team of scientists, including National Museum of Natural History Dinosauria curator Matthew Carrano and research associate David DeMar Jr. and University College London and Natural History Museum London science associate Marc Jones, describe the new species Opisthiamimus gregorithat once inhabited Jurassic North America around 150 million years ago alongside dinosaurs like stegosaurus and Allosaurusin an article published today in the Journal of Systematic Paleontology. In life, this prehistoric reptile would have measured about 16 centimeters (about 6 inches) from nose to tail – and could have been curled up in the palm of an adult human hand – and likely survived on a diet of insects and other invertebrates.

“What’s important about the tuatara is that it represents this huge evolutionary story that we get to capture in what is likely its final act,” Carrano said. “Even though it looks like a relatively simple lizard, it embodies a whole evolutionary epic dating back over 200 million years.”

The find comes from a handful of specimens, including an extraordinarily complete and well-preserved fossil skeleton excavated from a site centered around an Allosaurus nest in the Morrison Formation of northern Wyoming. Further study of the find could help reveal why the ancient order of reptiles of this animal declined from diverse and numerous in the Jurassic to only the New Zealand tuatara surviving today.

The tuatara looks a bit like a particularly hardy iguana, but the tuatara and its newly discovered relative aren’t actually lizards at all. They are actually rhynchocephali, an order that diverged from lizards at least 230 million years ago, Carrano said.

In their Jurassic heyday, rhynchocephalians were found almost worldwide, came in sizes large and small, and fulfilled ecological roles ranging from aquatic fish hunters to heavy plant eaters. But for reasons that are not yet fully understood, rhynchocephalians have all but disappeared as lizards and snakes have become the most common and diverse reptiles throughout the world.

This evolutionary chasm between lizards and rhynchocephali helps explain odd characteristics of the tuatara such as teeth fused to the jawbone, a unique chewing motion that slides the lower jaw back and forth like a blade of saw, a lifespan of more than 100 years and tolerance for colder climates.

Next O. gregoriAccording to Carrano’s official description, the fossil has been added to the museum’s collections where it will remain available for future study, perhaps one day helping researchers understand why the tuatara is all that remains of the rhynchocephali, while the lizards are now found across the globe.

“These animals may have gone extinct partly because of competition from lizards, but possibly also because of global climate change and shifting habitats,” Carrano said. “It’s fascinating when the dominance of one group gives way to another group during evolution, and we still need more evidence to explain exactly what happened, but fossils like this these are the way we’re going to put it together.”

The researchers named the new species after museum volunteer Joseph Gregor who spent hundreds of hours meticulously scraping and chiseling bones from a block of stone that first caught the eye of the preparator. of fossils from the Pete Kroehler Museum in 2010.

“Pete is one of those people who has kind of an x-ray vision for this stuff,” Carrano said. “He noticed two tiny pieces of bone on the side of this block and marked it to be brought back without really knowing what was in it. Turns out he hit the jackpot.

The fossil is almost entirely complete except for the tail and parts of the hind legs. Carrano said such a complete skeleton is rare for small prehistoric creatures like this one, as their fragile bones were often destroyed either before they fossilized or when they emerged from an eroded rock formation in our lands. days. Accordingly, rhynchocephali are best known to paleontologists from small fragments of their jaws and teeth.

After Kroehler, Gregor and others freed as much of the tiny fossil from the rock as possible given its fragility, the team, led by DeMar, set about scanning the fossil with computerized tomography (CT) at high resolution, a method that uses multiple x-ray images from different angles to create a 3D representation of the sample. The team used three separate CT scan facilities, including one housed at the National Museum of Natural History, to capture everything they could about the fossil.

Once the fossil bones were digitally rendered with sub-millimeter accuracy, DeMar set about reassembling the scanned bones of the skull, some of which were crushed, displaced or missing from one side, using software to finally create an almost complete 3D. reconstruction. The reconstructed 3D skull now offers researchers an unprecedented look into the head of this Jurassic-age reptile.

Given OpisthiamimusDue to its small size, the shape of its teeth and its rigid skull, it likely ate insects, DeMar said, adding that harder-shelled prey such as beetles or water bugs could also have been eaten. appear on the menu. Generally speaking, the new species looks a bit like a miniaturized version of its only surviving relative (tuataras are about five times longer).

“Such a complete specimen has enormous potential for making comparisons with fossils collected in the future and for identifying or reclassifying specimens already sitting somewhere in a museum drawer,” DeMar said. “With the 3D models we have, at some point we could also do studies that use software to examine the mechanics of this creature’s jaw.”

Funding and support for this research was provided by the Smithsonian and the Australian Research Council.