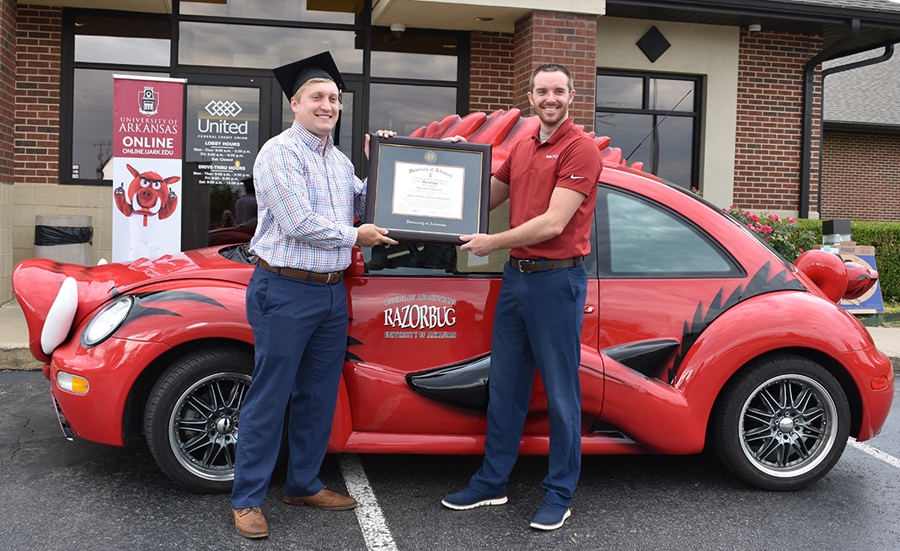 Trey Jenkins is the picture of perseverance.

The Fort Smith man who works as a commercial loan officer at the United Federal Credit Union in Fort Smith began his undergraduate studies at the U of A in 2011 after graduating from high school. On June 28, about 11 years later, the U of A’s RazorBug pulled up in the parking lot of Jenkins’ workplace, and Matt Willingham, associate director of online programs at the Sam M. Walton College of Business from the U of A, presented a framed diploma to Jenkins.

“I felt driven to do it,” Jenkins said. “I was so close when I left. When I was young I let other things go before me, but I know it’s never too late.”

He has worked in financial institutions for the past decade and wanted to get the degree to take advantage of opportunities that may arise in his future, he said. United Federal Credit Union offered a tuition reimbursement program that helped, he said.

Jenkins stayed in his home community and studied online at the U of A to earn a bachelor’s degree in accounting. More than 440 students who studied in online degree programs applied for their degrees at the U of A in May.

U of A faculty and staff traveled to southern Arkansas and the River Valley for two weeks in June as part of the RazorBug Diploma Tour to present diplomas to some of the recent graduates who have earned degrees in online programs. The RazorBug is a converted red Volkswagen Beetle that sports a Razorback muzzle, tail, and sharp spine. It has been used for recruitment and special events since 2005.

Jenkins said there are similarities between studying online and studying in person on campus. Either way, it’s important to pay attention, do all the homework and read the textbooks, he said. The knowledge he has acquired throughout his career so far and his ability to learn independently have also been useful in an online environment. Faculty members in its online program understand that students work full-time and they keep that in mind when designing courses, Jenkins said.

Having his bachelor’s degree gives him more credibility in his work, Jenkins said, and he plans to continue his education for an exam and other requirements needed to become a public accountant.

For Willingham, the RazorBug Diploma Tour offered a rare opportunity to meet a student online, seeing them in their element.

“It’s really special,” Willingham said. “It’s not something we can do a lot. We work with prospective students through orientation, onboarding and counseling, but it’s all online. The vast majority of students we don’t We’ll never meet unless they start. We don’t always have that last touch. To be able to come see Trey after he graduates and see what he does with it, it’s really special.”

The RazorBug Diploma Tour was hosted by U of A’s Global Campus. Global Campus works with university colleges to offer more than 75 online degree, certificate, micro-certificate, and bachelor’s degree programs. For more information about U of A ONLINE, please visit online.uark.edu.