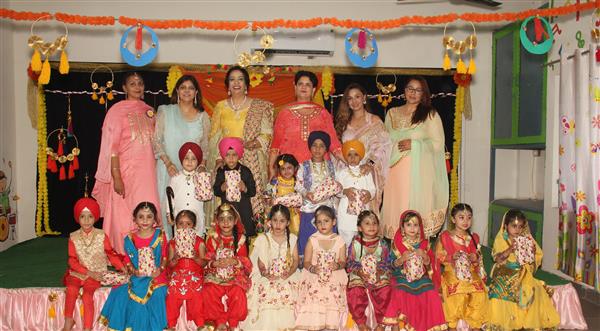 Jalandhar: The Teej festival was celebrated today in the pre-primary wing of the DAV Police State School, PAP campus, with much fervor and gaiety. Principal Rashmi Vij kicked off the celebration by lighting the lamp. For the occasion, children came dressed in magnificent Punjabi costumes. The children enthusiastically participated in the various activities. Along with the children, their parents also fervently participated in modeling and pairs of mothers and daughters, fathers and sons danced to Punjabi songs. All the preparation was done under the supervision of Savita Sharma, head of the pre-primary wing. Director Rashmi Vij congratulated the children and their parents on the occasion of Teej mela. Food, henna and bracelet stalls were set up in the main wing and fun games were also held. On this occasion, a draw was also made during which very attractive gifts were given to the parents of the children. It mainly consisted of a microwave oven, suitcases, sheets, dinner service, wall clock and other very attractive gifts. The children also enjoyed different types of swings. The modeling and dance competition jury included Gargi Sharma and Jaspreet Shahi. 200 children from Kindergarten to Class I participated in the function. The principal handed out prizes to well-dressed children. The result of the dance competition organized on this occasion is as follows: Kavyansh, Ruhan, Jasmin and Avneet Kaur won first place. Second prize went to Sahib Kaur, Wani, Samyra and Kuvera. Radhika, Arjun, Samaksh and Jasmilan were in third place. Tanveer, Ramnik, Ansh and Aarush ranked first in modeling. Harshika, Srija, Gurmannat, Vian and Parneet Kaur were in second place. Chandan, Navriti, Bavannia, Taksh, Inayat and Gursahij were in third place.

Lyallpur Khalsa College for Women, Jalandhar has organized an induction and orientation program for new female students corresponding to the 2022-23 session by IQAC department, Lyallpur Khalsa College for Women, Jalandhar. Principal Navjot addressed new students in the seminar room as well as in class. The students were informed about the college and its rich historical past. Students were also informed about internships, achievements, facilities, scholarships, financial aids and proud alumni of the institution. The students were then taken on the college tour where they were shown computer labs, fashion design labs, and language labs, etc. The students felt delighted to see the green and conducive environment of the institution. Then, the timetable for the current session was distributed to them. Towards the end, Principal Navjot congratulated the students and appreciated IQAC and Jaswinder Kaur, Head of Commerce Department and Adjunct Professor Harmohini (English) for their efforts.

Hiroshima Day was celebrated at Eklavya School, Jalandhar, with its message “to mark the tragedy of the 1945 fatal bombing”. A special assembly for peace was organized by the students of class IV. Class IV Sonam featured the poetic narration of the entire Hiroshima nuclear attack sequence and the unimaginable anger faced by the innocent people, graphically depicting the horror of the atomic bomb. JK Gupta (President) and Seema Handa (Director) stated that Hiroshima Day is celebrated on August 6 every year. It aims to promote a policy of peace against war. The day is a reminder of the bombing of Hiroshima by the United States during World War II. The Class III student also spread the message through the various slogans and banners. A competition was also organized on this occasion. Preschoolers took a step forward to spread peace with a silent march for peace displaying various game cards such as peace is patriotic and peace begins with a smile. A role play Sadako Sasaki (Japanese girl) was played by Class III student Nayra. Sadako Sasaki was a survivor of the bombing. Dimple Malhotra (Administrator) and Komal Arora (Principal) encouraged students through the message of peace to take a pledge and swear not to fight.

The Teej festival was celebrated with great enthusiasm at the model house branch of St Soldier Divine Public School, in which students and teachers dressed in traditional style. On occasion, the girls showcased their art by performing folk songs, dance, gidha, bhangra and modelling. Vice President Sangeeta Chopra, while congratulating everyone on the occasion of Teej, extended her best wishes to all.

100 participate in the talent hunt contest