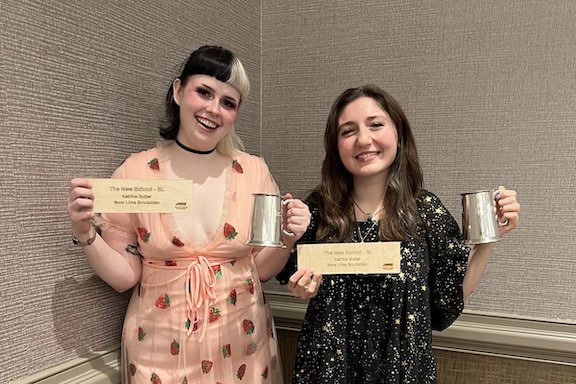 NEW YORK—The Board of Directors of the New school on May 5 voted to appoint Noor Lima Boudakian for a one-year term as a member of the board of directors. Lima Boudakian is finishing his third year at university. The board annually appoints two student trustees on the recommendation of the university president.

Lima Boudakian, 21, is completing a bachelor’s degree in economics and global studies at the university Eugene Lang College as well as a master’s degree in economics at The New School of Social Research, the faculty of graduate studies of the university. In addition to being on the Dean’s List every semester, Noor was an award-winning participant on the university’s political debate team; with her teammate Katrina Butler, she won a coveted place in the National Debating Tournament this year. She received the Max Adler Award for Leadership in Debate.

Trustees govern the university, charting a course for its future, overseeing investments, expenditures, faculty appointments, and the work of the university’s management team.

With her appointment as trustee, Noor will continue to give students a voice and serve as a student leader at the university. First elected as a member of the University Student Senate in 2020, in the most difficult days of the pandemic, she was re-elected and served as president of the senate for the 2021 to 2022 academic year. In this capacity, she oversaw the activities of the 22-member body and spoke on behalf of students to the administration and faculty of the university.

Noor’s goal as president of the university’s Student Senate was to ensure that students’ pressing concerns were heard and addressed even as the university and the world navigated heightened health, financial and emotional challenges. by the pandemic. Among his accomplishments is the establishment of a permanent student administration committee to review financial policy.

Noor was also a student member of the Dean’s Research Committee at Eugene Lang College, serving as a lecturer in liberal civic arts and participating in the Dean’s Honors Symposium, which showcases outstanding student research.

Noor has strong ties to Armenia and the Armenian community. She lived in Armenia from 2006 to 2010 and returned there frequently; most recently, she was there in March on a fellowship, the Eugene Lang Opportunity Award. Noor has been translating news from Armenian to English since Hamazkayin Central Executive Council since 2018. She completed an internship in Armenia with the Gomidas Institute in 2018.

Noor Lima Boudakian is the daughter of Martha Boudakian, a midwife, and Vincent Lima, a psychometrician who was editor of the Armenian Reporter and the “Armenian Forum”. Noor’s father is an alumnus of The New School; his grandfather, Gregory Lima, was a graduate student at The New School in the 1950s and returned to receive his master’s degree in 1982.

Seizures of prohibited and unauthorized items at Archambault Institution

These students say virtual learning makes the transition to high school, college much…