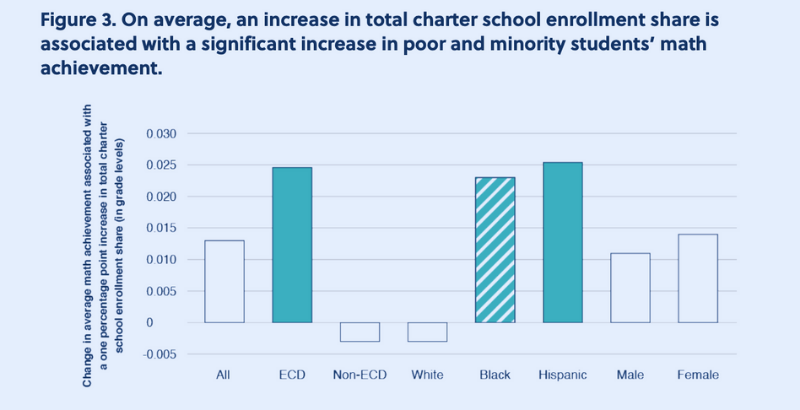 Thirty years ago, when the charter school movement was just getting started, devotees of big-city school systems feared these new options would drain critical funds, hurt children left behind, and create a system in which race played a central role. but an often unrecognized role that is even more unfair. Yet in recent years it has become increasingly clear that concerns about charter harms are misplaced — as demonstrated by a pair of new studies that find large and statistically significant gains for all students publicly enrolled in as charter schools expand.

If you’re familiar with charter school research, these results shouldn’t come as a surprise. After all, for the better part of a decade, a steady stream of studies has shown that enrollment in urban charters boosts academic achievement for low-income black and/or Hispanic students. For example, a 2015 CREDO analysis found that black students in poverty gained nearly nine weeks of English learning and nearly 12 weeks of math a year by attending an urban charter school instead of a school. traditional public.

Other research has shown that the effects of charter schools on student achievement in neighboring district schools range from neutral to positive. For example, a recent review of the literature on this issue identified nine studies that found positive effects, three that found negative effects, and 10 that found no effects.

Put these two findings together – that urban charters boost their own students’ achievement and that they have a neutral to positive impact on children’s achievement in traditional public schools – and the logical implication is clear: the growth of schools in charter should drive overall success for students in a given community.

Yet, for complicated reasons related to data collection and accessibility, direct evidence is limited to a handful of studies. The first, a 2019 Fordham Institute report titled Rising Tide: Charter School Market Share and Student Success found a positive relationship between the percentage of black and Hispanic students enrolled in a district-level charter school and the average achievement of students in those groups—at least in larger urban districts. The second, by Douglas N. Harris and Feng Chen of Tulane University, found a positive relationship between the percentage of all students enrolled in charter schools and the average achievement of all publicly enrolled students, particularly in mathematics.

Now, those two studies — which include more than nine out of 10 U.S. school districts and nearly 20 years of charter school enrollment data — have been updated with additional years of data and estimates, and their conclusions begin to converge.

First, both studies find that the overall effects of charter schools are overwhelmingly positive. For example, according to the Tulane study, going from zero to over 10% enrollment in charter schools increases the school district’s average high school graduation rate by at least 3 points. percentage. Meanwhile, the Fordham study suggests that a jump from zero to 10% in charter school enrollment increases the math scores of all publicly enrolled students by at least one-tenth of a grade level. .

Finally, both studies find that poor, black, and Hispanic students see big gains. For example, according to the Fordham study, an increase from zero to 10 percent in charter school enrollment increases math scores for these children by about 0.25 grade levels. Poor students also see a 0.15 grade level increase in reading achievement.

These findings are extremely important, given long-standing concerns that the growth of charter schools would harm children in traditional public schools, and given the opposition charter schools still face in some places. To realize their potential, charter schools must be allowed to grow. But for that to happen, policymakers and the public need to understand what the best research on charters really says.

At a time when the whole country seems to be in a bad mood, here’s some good news: as charter schools grow and replicate, parents have access to high-quality schools that better meet the needs of their children, students who remain in traditional public schools are seeing better outcomes, and the racial and socioeconomic achievement gaps that have resisted many other well-meaning reforms are beginning to close.

In short, no one needs to take sides on this issue, because it really is a win-win.

Michael J. Petrilli is president of the Thomas B. Fordham Institute. David Griffith is associate research director and author of rising tide and Still on the rise studies.

An institution that gives wings to children’s dreams