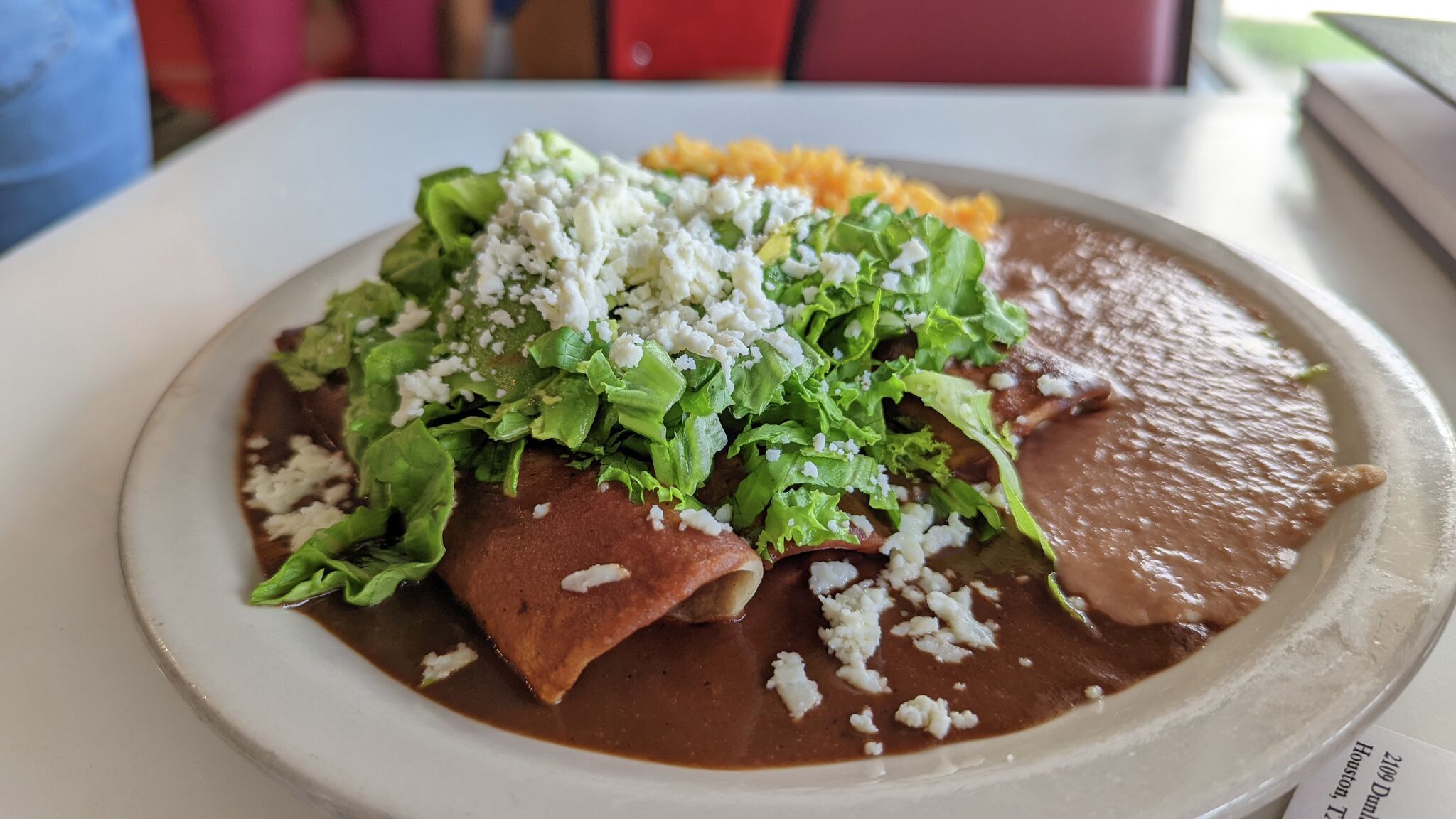 This is how I have been welcomed at La Guadalupana Bakery & Café since I started frequenting this beloved Montrose institution while studying at the University of Saint Thomas. Tucked away in a small strip mall on Dunlavy Street a few blocks north of Westheimer Road, this lovely little restaurant holds a big part of my heart.

After a long night of hanging out at the Grand Prize or dancing at the Boondocks, you can catch me – and much of Houston – here the next morning, devouring a hot bowl of menudo and dos tacos de barbacoa. I also come here whenever I miss my mom’s cooking because I know I can always stop by for a big plate of chilaquiles verdes or a torta de fajita.

Chef Trancito Diaz and his son Roberto opened La Guadalupana in 1995, originally just as a bakery. After requests for homemade Mexican dishes were made by their loyal neighborhood clientele, they began serving everything from mole poblano to enchiladas, semitas, tamales and tacos.

However, what made me fall in love with this place was their cafe de olla and the croissant de almendras. I’ve never really been a coffee drinker, but I absolutely crave this one. The beans are roasted and infused with flor de canela by Chef Diaz’s brother, Dagoberto, in Izúcar de Matamoros, Puebla, the family’s hometown. A cup of La Guadalupana cinnamon coffee with the toasted almond butter croissant is one of the most delicious pairings in the whole city.

The mole paste used by La Guadalupana is also imported from Puebla. Chef Roberto adds his finishing touches before serving it with pollo, enchiladas or tacos. The sauce is rich in flavors, with each bite you can taste the peppers, chocolate, nuts and other spices. It’s dense and creamy but not too thick, and a perfect combination of sweet and spicy. Your taste buds deserve to be blessed with this experience once in a while.

Trancito opened a second location, La Guadalupana #2, in Pasadena in November 2019. Roberto, who has worked with his father since the beginning, continues the tradition in Montrose. He follows in his father’s footsteps by often stepping away from the kitchen to greet his regulars and explain the menu to new visitors. He refers to his customers as “guests” or “amigos”, ensuring they are happy with the service and the food, striving to make everyone feel at home.

Although La Guadalupana hosts a steady stream of hungry people during the week, the weekends are always busier. Only three servers are needed from Tuesday to Friday, but this number doubles on Saturday and Sunday. Because each item is made to order, to ensure impeccable quality, Roberto warns customers that longer wait times may occur. Regulars are always happy to wait for a table on weekends, spilling out onto the terrace in the makeshift parking lot.

The restaurant’s popularity among Houstonians has already caught the eye of an international VIP. In early June 2016, I received a text that said, “Anthony Bourdain is in La Guadalupana right now!”

It’s true: For his CNN show “Parts Unknown,” the celebrity chef shared a meal at La Guadalupana with local entrepreneur and chef David Rodriguez of The Tipping Point Coffee. Roberto was on hand that day and served Bourdain and the crew chilaquiles verdes, machacado con huevo, horchata, and of course, café de olla. Unfortunately, the segment did not air on the Houston episode.

Although much of the neighborhood has changed around it, La Guadalupana continues to be one of the best Mexican restaurants in Houston. Roberto says some “amigos” he served 20 years ago are now coming to the restaurant with their own children.

When I visited on a recent weekday, I saw a whole family sitting around the long table along the wall: grandparents, middle-aged adults, and several children and toddlers. Everyone had their favorite menu item memorized and the happiness in their eyes when they received their food was just magical.

So there I sat, enjoying my breakfast torta with chorizo, egg, papas, frijoles y queso, feliz de la vida and thinking about my upcoming birthday. I am happy doing what I love, surrounded by my family, friends and of course tacos.

New principal for the public school board