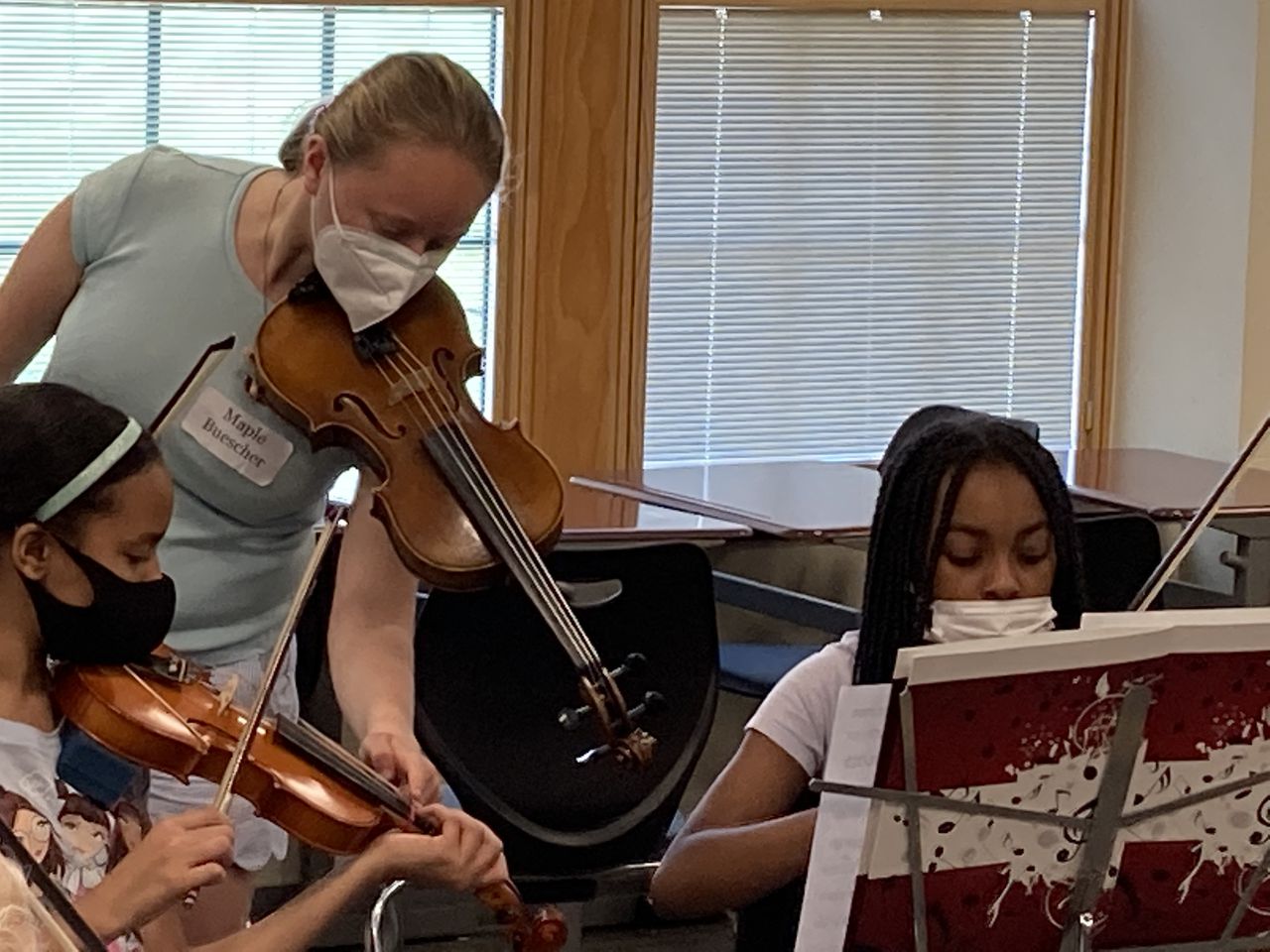 CLEVELAND, Ohio — On March 18, I performed in the last concert of my freshman year of college, with my school’s symphony orchestra. Dressed in black, with make-up and shoe polish galore, we played 90 minutes of Brahms, Mendelssohn, Bruch and Piazolla in full and celebrated with no-name liquids in red solo cups afterwards.

On June 18 — exactly three months later — I was on stage with an orchestra that was perhaps even bigger. This time I was in a T-shirt and jeans, playing alongside 10-year-olds, whose violin keys were still taped over, marking the correct finger positions. The 70 children seated on stage with me and several dozen other staff were performing at the final concert of this year’s Reaching Heights Summer Music Camp, a week-long program for middle school musicians in schools. public of Cleveland Heights-University Heights.

I was once a camper in the same program, where I learned the skills that led to my college orchestra audition. Like this year’s campers, I took five days of camp — each including two large orchestra rehearsals, a chamber band rehearsal, a music theory lesson, masterclasses, sections, an elective block, and, of course, of course, lunch and recess — before playing in the Saturday Concert, playing music I had received less than a week earlier. The experience was so magical that I returned year after year as a consultant.

At camp this year, we knew that all of our students had lost years of musical education due to the pandemic. Most of them were in the very early stages of their instruments. Thus, we consciously fostered a joyful learning environment among them. We were reminded that “everyone is a teacher and everyone is a learner”.

The value of arts-based education was reminded to me when I learned, alongside my campers, lessons that might be difficult or impossible to grasp in traditional classrooms, but which come easily and naturally. when integrated into arts education.

By thinking about the meaning of time signatures in music, campers learned about fractions in a way that felt more accessible and relevant to them. By learning new notes their physical dexterity improved and by identifying chords by ear their ears sharpened.

By preparing for a gig in just five days, campers learned that growth is possible in a very short time. And after being pushed to difficult lengths, they learned that challenge can be rewarding. The 11-year-olds, who spent their lunch periods writing note names in their music, then bouncing around in dizziness when they played them correctly, was proof enough.

By taking instructions, the campers learned to listen effectively and they learned to use their pencils. A young camper told me that he discovered that it was much easier to remember things if you wrote them down as soon as you said them. As a student, I have reason to believe it’s a life skill.

By playing in a large orchestra, campers learned the importance of diversity and united difference. They learned that the beauty of music comes from the interaction of different parts and instruments, not from everyone trying to sound the same. Realizing that not every part has the melody every moment, campers learned the importance of balance and teamwork. They learned that while every part is important, sometimes one instrument may need to play softly, so another can be heard – and that this, over time, will be reciprocated. They learned that celebrating everyone requires meeting different needs at different times, and that makes the whole group successful.

As much as they learned, the campers also taught me a lot. Campers taught me that there are no children beyond the capacity to grow. On the first day, I was tempted to say that some students were too shy or distracted to be reached. On Wednesday, however, the same kids who had previously been too scared to answer when I asked their names volunteered to tap out beats alone in front of all of their theory lessons.

The campers taught me that growth is possible for every child, even if the ultimate definition of success is different for each of them. I’ve met campers who could play all the notes on the first day, and campers for whom the most complex passages were out of reach even at the end. But the campers in this second group – who never quite managed to play everything perfectly, but whose abilities still skyrocketed – impressed me beyond measure with their dedication, initiative to ask questions and their bravery to try hard things. These traits deserve as much celebration as the technical abilities.

Campers have taught me that joy and positive encouragement can go a long way. When campers were praised for asking questions, they became more curious and we were able to help them grow more effectively.

Above all, the camp taught me that what we do is important. The camp staff included many adults now who had been campers themselves and then gone on to world-class music conservatories and professional musician jobs.

Even for campers – like me – who won’t be professional musicians, the skills we took with us are enduring. The skills I learned as an 11-year-old camper playing in my camp string quartet are the same ones I use to rehearse with my college string quartet. I check my posture with a trick I learned at camp, and the mnemonic I use to remember the order of the flats is the one I learned in camp’s music theory class. And the joy that I feel after each concert is a feeling that I also felt at the camp.

If that sounds magical, that’s because it is. The growth – in confidence, joy and musical skills – that occurs in five days is breathtaking. This is especially true considering that our campers are students from a public school district designated as “failed”. At camp, they’ve proven they’re not under-talented or unapproachable, but can thrive with the proper attention.

If it seems important, you can help. Fund your public school‘s arts programming. Donate to your local public school’s music department. Vote for school levies to provide appropriate funding for public arts education. Reaching Heights is one of many nonprofits that offers scholarships to students who otherwise could not afford private music lessons – a gift that offers immeasurable growth and countless life lessons – and funds those with public generosity; if you feel so moved, donate to a similar program.

Most importantly, go to your third-grade student’s recorder recital or your 12-year-old’s beginner orchestral concert. Encourage your young musicians. No matter where their musical education takes them, they will learn valuable lessons throughout their lives.

Maple Buescher is from Cleveland Heights, a 2021 graduate of Cleveland Heights High School and a current student at Bates College, where she plans to major in English. You can reach her at maplebuescherPD@gmail.com.