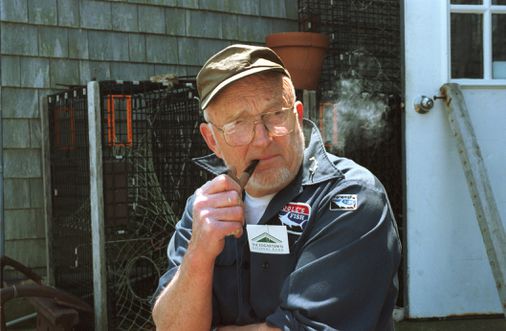 Everett Poole, Chilmark institution at Town Meeting and its fish market, dies at 91

Mr Poole, who served as Chilmark Town Moderator for more than 40 years until he gave up the gavel last year, was 91 when he died at his home on February 21. He was also the longtime owner of the Poole Fish Market in town.

Fast forwardA look at the news and events that shape the day, delivered a few times a week with a side of humor and a dash of attitude.

“Many people have reported that he was a man of few words, which is not true,” his daughter Joan Poole Nash of West Newton told The Globe after his death. “He was a man of many words.”

Sometimes he used those words to make headlines.

In 1977, he was one of the leaders of a secession movement when residents of Martha’s Vineyard and Nantucket held votes to secede from Massachusetts because a state legislative district was no longer specifically dedicated to he is.

“We should leave Massachusetts and have fun on the side,” he told The Globe at the time.

More seriously, he added in another 1977 interview: “If a man has never had to live in a place and earn his living, he has no idea what the problems are here.”

Living a boat or plane ride from the mainland gives the islands unique legislative needs, Mr Poole said then.

“It’s a totally different life,” he told the Globe. “We wear the same clothes and smoke the same cigars. But we can’t just drop our hats and go to Boston from here.

During his life at Chilmark, Mr. Poole became a symbol of those residents who were born, grew up and stayed on the vineyard. He was among those old enough to remember the years before the island’s transformation into an increasingly famous tourist destination, accompanied by rising housing costs.

When asked in 2015 what he wanted for the future of the vineyard, he had a quick answer.

Mr Poole was equally succinct with advice on how to prepare the fish, which he ate daily.

“Scale it, cut off the head, throw it on the grill, leave the tail for something to grab,” he told The Globe in 2003.

Having spent around half his life serving as Moderator of the Town of Chilmark, Mr Poole had particular insights into his own history with the post, the importance of Town Meeting for democracy and how it could also be the source of some good laughs.

“I remember an old man standing up and talking for what seemed like half an hour, arguing about spending 50 cents on a new baseball for school” , Mr Poole told Globe columnist Thomas Farragher in 2018. “Yup. I remember it well.”

With his head shrouded in smoke from the pipe he drew during the interview, Mr Poole added that the rally was “the best entertainment in town”.

A descendant of whalers, Everett Henry Poole was born in 1930 and grew up in the Menemsha Crossroad area of ​​Chilmark.

His mother, Dorothy Cottle Poole, was a teacher and principal at Menemsha School. His father, Donald Poole, was a fisherman.

When Everett was a boy, Poole’s home had no electricity and the family pumped water by hand, he told Martha’s Vineyard magazine.

His duties were to fill the kerosene stoves that heated the house, to feed the chickens and to collect the eggs. Among his early jobs were mowing lawns, a paper route and stocking shelves in the local store, where he worked when he was 11 years old.

“I was making a dollar a day and was damn lucky to have a job,” he told the magazine. “That year, I was the only child working full time. It was 1942. The world was a mess.

One job that didn’t work out was tagging with his father’s fishing operation.

“The old man threw me off the boat in mid-July,” Mr Poole told the Vineyard Gazette in 2018. “I couldn’t get a job anywhere at that time. I had something Either that or there would be no ice for the rest of the summer.

So, as a teenager, he started his own fish peddling business, which he sold door-to-door from a stroller.

“He would buy it from the boats and then he would sell it to the customers,” his daughter Katharine told The Globe last week, “and that’s how the fish market started.”

Selling fish became a big part of his life’s work when he opened Poole’s Fish in Chilmark. But first there was a detour to the University of Rhode Island, where he studied engineering and changed his major to business.

Then he served in the coast guard before returning to the vineyard.

He also married Virginia Fedor, known as Jini who died in 2008, months before their 51st birthday.

She was a writer who directed children’s plays, acted in summer theater productions and was involved in community organizations. She also worked with the film crew for ‘Jaws’, helping cast the locals, including Mr Poole’s father in the 1975 film.

For more than half a century, Mr. Poole has been a mainstay in the Chilmark business community, running Poole’s Fish and the Chilmark Chandlery supply store. For a time he operated a Texaco station.

“He had more godchildren than anyone else,” she added. “Everyone wanted him to be their [child’s] Godfather.”

Alongside his decades-long tenure as city moderator, she said, Mr Poole previously served on the board and the conservation commission.

“He was a really great guy, and he did a lot for his city,” Joan said. “But also, he was interested in everything.”

Besides his daughters Joan and Katharine, Mr. Poole is survived by his wife, Dianne Smith Poole; and his son, Donald; and three grandchildren.

“He loved this whole island and everyone here,” Dianne told Martha’s Vineyard Times.

Joan said the family plans to hold a small private service and will announce a larger outdoor memorial gathering that will be open to the public.

“My dad was one in a million,” Katharine said. “He was also a badass. Very clear and direct, but he was also a very nice person.

He put these traits to good use as Town Moderator, a position he was first elected to in the late 1970s, giving everyone at Town Meeting a chance to speak up.

“It’s the best form of government there is,” he told the Globe in 2018. “Everyone has a chance. I strongly believe in it. »

Bryan Marquard can be reached at bryan.marquard@globe.com. Travis Andersen can be contacted at travis.andersen@globe.com. Follow him on Twitter @TAGlobe.