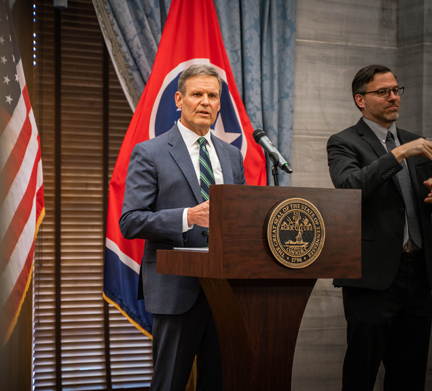 Tennessee’s legislature spends less on the education of public school students than almost any other state in the country. That’s been true for years, and in 2020, Democratic lawmakers united behind an effort to invest an additional $1.5 billion in Tennessee public schools.

Two years later, Governor Bill Lee pledged to increase funding for public education by $1 billion over the next two years, but that comes with a catch: legislation that completely rewrites the school funding formula.

“This plan is a significant down payment, but when it comes to public school funding, details matter,” said Sen. Raumesh Akbari, D-Memphis, who serves on the Senate Education Committee. “This law could affect a whole generation of students and teachers. With the stakes so high, we can’t afford to be wrong. I believe we should slow down, dig into the details and take our time. We didn’t get into this education funding gap overnight and we’re going to need more than a few weeks to get on track.

In the current 2021-2022 school year, K-12 public education will account for approximately $10.4 billion in spending in Tennessee, 89% ($9.4 billion) of which is shared by state and local governments.

In a press release, the administration described its new student-based formula as a $9 billion investment in public K-12 education — but that’s almost the exact amount that governments of states and locals are currently spending.

“It looks like a formula that was written to distribute the money the governor was willing to spend rather than a plan that considers what is actually needed to educate students,” Sen. Yarbro said. “If we’re going to design a formula, it should push the legislature to make sure we’re doing adequate funding instead of starting with what we’re already spending.”

Current levels of student funding are not great. Tennessee ranked 45and in the country for student funding, according to the 2021 Rankings and Estimates Report.

Some public education advocates, like Sen. Heidi Campbell, D-Nashville, worry that the governor could use the school spending formula to quietly push his personal policy preferences, such as private school bonds, state taking control of local charter school endorsements, Wall Street hedge funds getting a share of charter funding and inserting religious ideology into education.

“The governor’s child-tracking funding model in and of itself isn’t such a bad thing, the problem is all the political priorities he’s built around it,” said Senator Campbell, who described Lee’s program as a threat to the public foundation. education.

“There is an intent here to fundamentally change the way we raise children in the state of Tennessee and that is alarming,” Senator Campbell said. “Follow the money — this is about privatizing our public school system. On top of that, the governor announced that he was working with Hillsdale College, a private Christian college, to bring more charter schools to our state.

The $9 billion legislation needs careful consideration, according to Rep. Vincent Dixie, chairman of the House Democratic Caucus, who expressed concern about the aggressive timeline for passage announced by the governor.

“There are major issues here that need to be looked at and discussed in a measured, bipartisan way and the governor is trying to rush this bill in about 30 days,” Rep. Dixie said. “We want our students across the state to have the best education possible and I don’t see how we can have substantive discussions about that in just one month.”

Senator Akbari echoed that sentiment, saying local school districts deserve a seat at the table now that the formula is finally public.

“For students in Memphis County and Shelby County schools, this means we need a meaningful opportunity to receive feedback from our local education experts, district officials and teachers,” Akbari said. “The right funding formula strengthens our students and our schools and gives everyone confidence that we are moving forward together.”