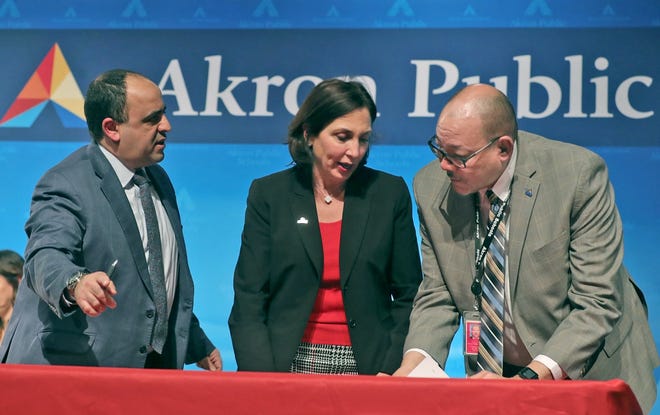 AKRON – Akron high school students interested in IT careers can get a boost in college through a new partnership between three educational institutions.

Akron Public Schools, Stark State College and the University of Cincinnati on Thursday announced a way for students at Kenmore-Garfield High School to earn enough college credit in high school to automatically be admitted into the Cincinnati computer program.

The program would save students a year of tuition fees and give them the opportunity to get a job while studying at a Cincinnati co-op.

“This program will tackle the growing cost of education and prepare our students for well-paying and in-demand careers in IT,” Akron Public Schools Principal David James said during a presentation announcing the new high school program on Thursday.

It was music to the ears of Rodney Thompson, the father of a current Innes college student who will be attending Kenmore-Garfield for high school.

â€œI think it’s a great opportunity,â€ he said. “It’s something we’ve never had.”

Although career planning is still a few years away for his son, Isaiah Thompson, a seventh-year student, science may be a good fit for him, his father said. The two love to watch documentaries about the solar system together.

Thompson said he got a bachelor’s degree and because of student loans he was still paying it off at age 40.

â€œStudent loans are like a bad dream,â€ he said. “I think this program keeps them from having to go through this.”

He was also impressed to learn that Kenmore-Garfield was the only school chosen for the program.

While it starts there, the opportunity could expand to other schools that have the IT route, said Rachel Tecca, director of the College and Career Academy.

â€œI think this is a great opportunity for the kids and it helps our community to really fill some of these IT positions,â€ Tecca said. “I hope this is the start of something really special at Kenmore-Garfield.”

The school is also accepting open enrollment, so non-zoned students in Kenmore-Garfield who wished to attend for this program may do so.

Beginning this fall, students will begin the program in Grade 10 by taking free college courses at Kenmore-Garfield via Stark State. By the time they graduate from high school, they can earn the equivalent of one year of college credit. Those who do will be automatically accepted into the Cincinnati Computer Program, provided they have a GPA of 2.0 or higher.

They also have the option of earning an associate’s degree at Stark State after graduating from high school, which would only require an additional year.

Next year’s juniors and seniors can also take the program and earn college credit, but would not have enough time to complete enough courses to bypass their freshman year of college and would not automatically be accepted into Cincinnati. .

Any student who follows the Kenmore-Garfield Computer Science course is eligible for the program and can still apply to Cincinnati even if they do not earn a year of college credit while in high school.

The university also has a unique co-op program for its computer science students to help them find jobs to offset tuition fees, Tecca said. The cooperative supports students with resume writing and interview skills, and has a network of companies seeking help with IT support.

Professor Hazem Said, director of the Cincinnati computer science curriculum, said the partnership between the three educational entities aims to create pathways for students to be successful if they are also invested.

â€œWe come together to remove all barriers in front of the student and say, ‘We are going to create a path for you, and the key to success in this path is: are you ready to practice? ” ” he mentioned.

Extract from the Akron Beacon newspaper: Kenmore-Garfield Students Can Access University Through IT Partnership