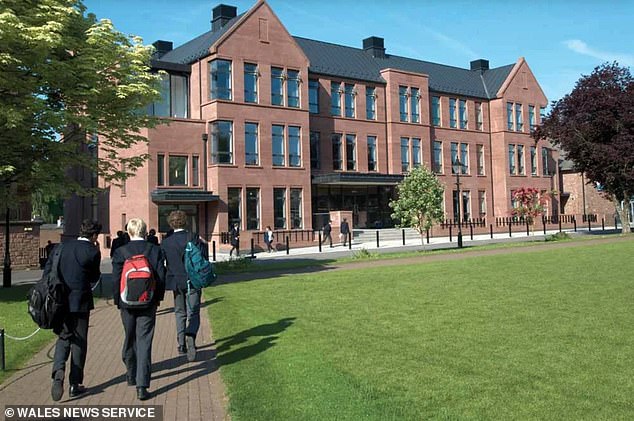 By Jonathan Rose for Mailonline

A £32,000-a-year public school is set to make history by going coeducational for the first time in 408 years.

This means that pupils aged 3 to 18 will learn together as part of ‘big steps towards sustainability’.

He said: ‘We believe that moving to an all-coeducational school will enable us to provide a top quality education for our students aged three to 18 – for generations to come.’

Monmouth School for Boys was founded in 1614 through a bequest from William Jones, a prosperous merchant and trader.

The boarding school will have a ‘rationalization’ of buildings to take ‘huge steps towards sustainability in all aspects of our schools’ areas and reduce our environmental impact’.

Lord Moynihan added that there was ‘a significant trend towards co-education in the independent schools sector’ and claimed that ‘the majority of parents believe it prepares their children adequately for college and adult life’.

He said: “We started this discussion process in response to that and I’m really excited about what the future holds.”

“The girls’ and boys’ schools deserve their strong academic and pastoral reputation and should be proud of what they have achieved.

“If we eventually decide to merge, we will ensure that the best aspects of both schools are preserved.”

In a statement sent to staff and parents, it was announced that the governors and senior management of Haberdashers’ Monmouth Schools have launched an assessment process with a view to potentially merging Years 7-11 in Boys’ and Girls’ Schools. girls.

Lord Moynihan said: “We are very excited about the potential for comprehensive co-education, which responds to societal changes and is increasingly what parents, and even pupils themselves, are demanding.

“We have two great schools, and we believe bringing them together will make them even stronger, providing the best education for our students.”

A final decision will be made in October 2022, with the prospect of a fully coeducational school in September 2024

“We propose to deliver transformative development, including a range of exciting and innovative pioneering initiatives and property developments such as the creation of an exceptional Sixth Form Centre, improved sports provision, more opportunities in the arts, a better onboarding experience and unifying the work week for boys and girls.

“The resulting merger would also make huge strides towards the sustainability of all aspects of our schools’ estates and reduce our environmental impact.”

Speaking to reassure the staff the school employs, he added: ‘We recognize that our schools are an important feature of life in Monmouth.

“We are a major employer in the city and value our responsibilities to the wider community.”

A final decision will be made in October 2022, with the prospect of a fully coeducational school in September 2024.